Clean Up and Declutter

The last time my older son was away for a visit with grandma and grandpa, we lived it up like people with no children. We drove all over town with our few-months-old baby, eating at new restaurants we wanted to try, sitting in traffic, drinking fancy beers at fancy places. The baby was a good sport about the whole thing. And we relished those “easy” days of only having one child to take care of.

Well, we dropped the 2 year old off at grandma and grandpa’s house again this week. But instead of using the time to catch up on all the social stuff we’ve been missing, I’m using it to clean the house.  I know, b-o-r-i-n-g. I’m trying to free the house of clutter, which is probably impossible with young children. I mean … they just collect so much stuff.  Finn might find a marble or a rock outside and suddenly it’s a treasure he needs to have on hand at all times. Friends call up and ask if we want some of their old hand-me-downs and I say yes because I think it’s going to be shoes or something and it turns out to be three giant trucks that are too awesome for us to turn away. And then there is the art that comes home from school — the sweet little projects he makes with his friends. It all piles up and I feel so guilty throwing any of it away.

Here is what is hitting the garbage this week:

This is a pool noodle race track, which is all over Pinterest. It is supposed to look like this: 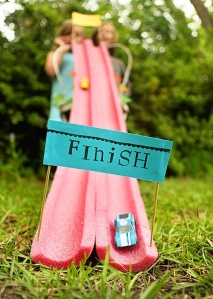 Mine kept falling apart no matter what I did and I found the baby chewing on the toothpicks a few times. Bye-bye!

Another: this bag of ponies. 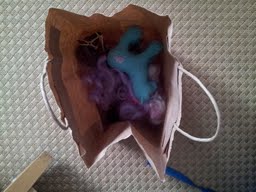 I’m hoping I can re-home these instead of throwing them away. These were mine when I was a kid and I had such hopes that my kids would love ponies like I did. I guess I thought it would make it easier to relate to them, instead of me having to learn all about what they love. You can guess how that worked out — ask me any question about steam engines, I dare you. It wouldn’t be so bad if they just … passed over the ponies … or didn’t like them as I had. But my children are actively icked out by the feel of pony hair. Finn gets the “throw up” look on his face when he accidentally encounters one. I want to just leave these on the curb to become someone else’s problem, but I believe Salty and Quarterback may be worth some money. Sigh. I guess now I get to stare at them for the next six months while I try to muster the energy for e-bay.

Here’s another toy I feel sad that we do not like to play with: 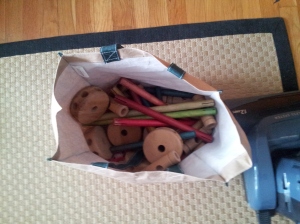 Giant tinker toys. I feel like maybe we just need to be older, but so far these have poked everyone in at least one eye every time I bring them out. Bye bye.

I’m also getting rid of Finn’s beloved Valentine’s box he made at school. Oh, the mom guilt over this one. It’s a shoe box he decorated, full of tiny slips of paper from his friends. It has been hanging around for months. But he still likes to sit with it and take out all his notes and talk about which one of his friends gave it to him. It is so sweet it is killing me to throw it away. I am really hoping he doesn’t notice it’s gone.

Here’s to a cleaner, tidier house. For a few days, anyway, until we have his birthday party … 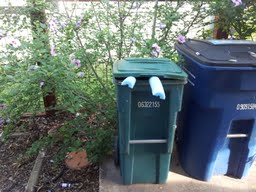 2 responses to “Clean Up and Declutter”